The Hochdorfer brewery relies on the CTR company 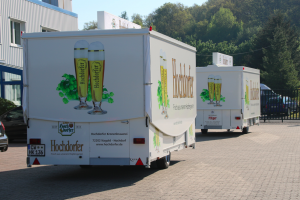 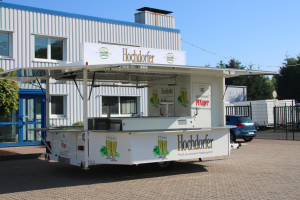 The Hochdorfer brewery from Nagold-Hochdorf in Baden-Württemberg region has decided to go for the CTR services and their professional know-how approach. An upgraded truck and a newly built concession stand were delivered to the end customer of the brewery, Pflüger Getränke.

The older mobile catering truck has gone through a detailed “lifting”, thus, it looks fresh and includes an updated equipment. This stand offers a four-line beer system which ensures a fast and an easy pouring of beer to glasses of guests. A concession stand was upgraded by adding a new support wheel and corner columns are partially welded. Talking about a design and a new look of the mobile catering truck, there is a number of changes: the stand has been painted white and enriched with a logo of the brewery Hochdorfer.

In addition to the renovated stand, a newly built mobile catering truck has also been delivered. The stand of the series GA 4600-8 EK Moritz has reached its new house at Getränkepflüger GmbH in Fellbach, as well as in Baden-Württemberg. The beverage merchant offers their clients a delivery service, as well as a truck rental service for events and parties. The company exists since 1924 and being managed by the third generation of the family.

The new mobile catering truck is a one-axle vehicle which can be turned only by one person. It is possible due to a practical one-hand folding mechanism which can open all the sides at the same time. The concession stand is equipped with two fold-up sales stands and two standing tables that can be opened at the rear. The cooling room is accessible both from inside and outside and is quite spacious. This truck has three separate doors. Both dispensing counters are equipped with a sink, a glass shower, a drip tray with a perforated cover and a three-line dispenser.